Yesterday marked two months since I had the procedure to terminate my third pregnancy. My second miscarriage at 6 weeks earlier last year. My first was about as successful as they get – GG turned two last week.

In the days that followed that horrible ultrasound, I was in shock. I cried and I was sad, but overall I felt okay. I talked a lot about gratitude, acceptance and counting my blessings. And that was important – to get me through everything I needed to endure that week. Somehow I eased back into regular life, unsure if maybe I hadn’t cried enough, felt enough, mourned enough.

And then a month later, there it was. A big-ass emotional crash. I cried more – a lot more. I was plagued by thoughts like “maybe there’s something really wrong with me” and “three years ago I was normal and now I’m broken” and plenty of “fuck fuck fuck, I can’t believe that happened!”

I was obsessed with giving it a name, explaining what was going on. I’d been fine and now I was losing my shit – what the hell? I kept googling the Stages of Grief and getting myself all muddled up, trying to figure out where I fell in the process. This cartoon I found in such a googling frenzy seemed to sum up the accepted process: 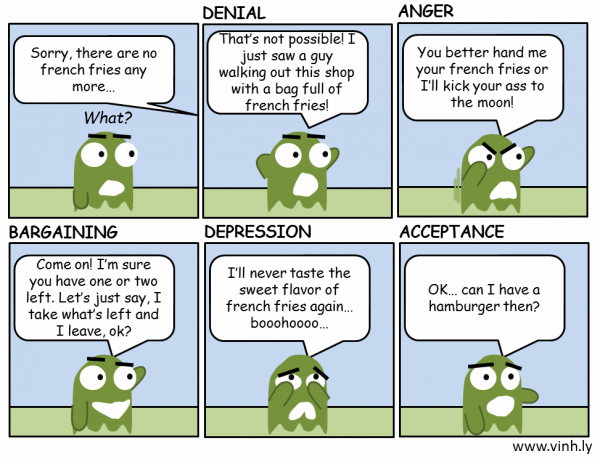 But it didn’t feel like that to me. I wasn’t going through stages – I was just grieving. Layers of sadness on top of denial spread with shock, and some acceptance sprinkled on top. It’s not a five-part course with an “over it” certificate at the end. It’s a grief sandwich.

I accepted both pregnancy losses pretty early on, straight away even – to some degree. And yet denial lingers. A part of me looks forward to getting pregnant again as getting “back on track” – rather than starting a totally separate pregnancy. I still wear maternity clothes sometimes. Okay, most of the time. I say they’re just more comfortable (and they are), but I wonder. It’s like I’m just holding my breath, hoping to put three pregnancies together to make one healthy baby.

That crash last month – that was depression. I mean, I would use the word sadness rather but either way, I was feeling the loss in my heart – and it made the whole world around me look horrible. It was a heavy, dark feeling in my stomach that bubbled to the surface and stuck around for a good couple of days. And with those feelings came a serving of anger, too – though it probably didn’t get directed at the right source. Sorry dear husband.

What I’ve realized in the weeks since is that the labels don’t matter. I’ve made an effort to create some space for these feelings to come up and play themselves out – time that I’m not at work or with GG. Lots of yoga and good food and even some time alone when I can snatch it. A quick getaway with my husband and this stunning view worked wonders:

It’s a weird kind of grief, this pregnancy loss. So disappointing and sad, and yet tinged with hope – for the next one. The truth is – I think my acceptance will only be complete once I have a healthy baby in my arms. Hopefully sooner rather than later. In the meantime, this is where I’m at – still in the thick of it but better and better every day.

A former joker, smoker and midnight toker, Elana currently lives in Israel with her superstar son GG and daughter Little A. She's been working in digital content creation for the past 16 years, currently serving as CEO of The Cannigma. Yoga: ashtanga, meditation: vipassana, food: organic with a generous splash of pizza. View all posts by Elana Kirsh