Despite what I was led to expect – by peers, family members and mainstream media alike – I haven’t found pregnancy to be that difficult at all. Certainly, I do get a bit more tired and emotional than I used to, felt queasy as hell in the first few weeks and have had the odd bout of heartburn (more likely caused by the obligatory iron tablets than anything else) – but it’s been nothing like the nine months of hell that popular literature and opinion had led me to anticipate.

In fact, most of the time I feel great – both physically and emotionally – unless it’s 9am. Because that’s when my daily email from “What to Expect” arrives, carrying its latest attempt to simultaneously scare the shit out of me and make me buy truckloads of baby things that I’m pretty sure we don’t need. For starters, let’s check out the subject lines on the last week’s emails:

Seriously? How is it that pregnant women are simultaneously perceived as being glowing and radiant, all the while suffering from peeling skin, popping veins, colds and sore necks? What am I meant to be growing in here, an evil monster or a baby? How about:

I know everyone’s different but somehow we as a society seem to have accepted a myth that pregnancy has to be one of the most unpleasant periods in a woman’s life – when really it should be one of the most precious and empowering. And I think it’s a damned shame. Even women – actually, especially women – dealing with uncomfortable symptoms like back pain and headaches would be far better served by some encouragement and tips on how to relax than by this anxiety-invoking junk.

Rather than learning how to be good patients, and to constantly focus on the negative, we should be gearing up to be good parents – I mean come on! I’m growing a human being inside of me! How freaking cool is that?! I strongly encourage pregnant women, their partners, and anyone else involved in the process to surround themselves with as many positive voices and sources of information as possible (see below for a list of places to start), to help combat this dangerous influx of negative messages.

If this sort of attitude doesn’t come naturally to you – seek out support. It’s there, albeit hidden. Take a birthing class which focuses on natural, non-medical options (yes, while making sure that you know what to do if something goes wrong). Refuse to get into battle story-esque conversations about horrible, stressful births. And it sounds crazy, but I really believe that eating well, resting when you can/need to and getting some exercise in a few times a week can make all the difference to a positive outlook and more enjoyable pregnancy.

Oh, and if they’re getting you down too, probably a good idea to unsubscribe from What To Expect’s daily horror updates.

Of course, I’m not in the clear yet, with still (hopefully) somewhere between 4 and 8 weeks until our baby’s Birth Day. But if this all goes down the drain next week at least I will have had eight-and-a-half months of relative calm. And that’s without even mentioning the head space I intend to be in when the much anticipated day arrives. More on that soon 🙂 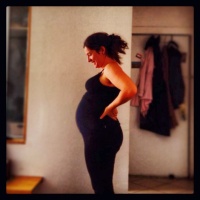 A former joker, smoker and midnight toker, Elana currently lives in Israel with her rock of a husband Uri, superstar son GG and toddler Little A. She's been working in digital content creation for the past 14 years, currently running a team of writers, editors and researchers at a cannabis startup. Yoga: ashtanga, meditation: vipassana, food: organic with a generous splash of pizza. View all posts by Elana Goldberg